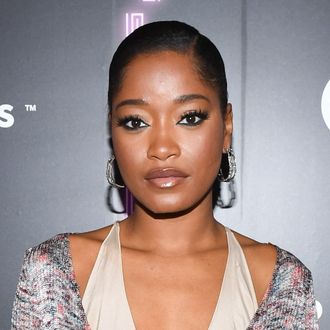 Keke Palmer implored National Guard members to show their support for anti-racist protesters during a demonstration on Tuesday. In a now-viral video tweeted by journalist Gadi Schwartz, Palmer is seen talking to National Guard troops about the urgency of the moment and the need for police to listen to marginalized communities: “This is when y’all stand together with the community, with society, to stop the governmental oppression. Period. We need you.” One of the soldiers tells Palmer that he “agrees” with her, and Palmer then urges him to “march beside us.” The soldier replies that he can’t leave his post and has to “control” the intersection the protesters are marching on, to which Palmer responds, “What is there to control?” With encouragement from the crowd, the soldier eventually kneels along with the rest of his unit, but refuses to march. Palmer can be heard saying “That ain’t enough for me” and continues to encourage the soldiers to march with the protesters.

A transcript of Palmer’s words to the National Guard:

“Once the looting starts, the shooting starts?” You have a president talking about the Second Amendment as a use for people to come out here and use firearms against the people that are protesting. This is the message that we’re seeing. I don’t know if you on social media, because the news don’t tell you everything. But you have to pay attention to what’s going on. Or else, we have a president that’s trying to incite a race war. And the borders are closed. We can’t leave. You have people in here that need your help. This is when y’all stand together with the community, with society, to stop the governmental oppression. Period. We need you.

Control? What is there to control, man? Why aren’t you with us? It would send a huge message, we just march. March the whole round with us. You and your men, ya’ll protect us. March around like we just did. Do that march with us.

Update, June 3, at 11 a.m.: The Strahan, Sara, and Keke host joined her Good Morning America sister Robin Roberts Wednesday morning to double down on her important statement. Palmer explained that she wondered why the National Guard officers didn’t just join the protesters when the four armed men approached. By the end of the dialogue, Palmer had convinced them to take a knee, but she doesn’t think that was enough. “Though the kneeling, it can be seen as a walk in the same direction, we all can also see that just moments after, in some of these cities where we’ve seen the kneel, we’ve also seen the teargas and everything, the chaos afterward,” the 26-year-old said. For her, duty isn’t a good enough reason to not stand up to injustice. “I know there’s a person in that uniform and I wanna know that the people that are in these powerful positions of saving or taking a life, I wanna know they’re with the citizens and committed to taking a stand against the system and the injustices,” she said. “And if we are unified, no matter who you are, what you’re wearing, we can create change. Buildings can be rebuilt, but once lives are taken, they’re gone.”

Palmer’s emotional speech at the Los Angeles protest struck a chord online, with many Hollywood figures coming out in support of her.

The End of Racism? | AMERICAN HERITAGE

Read more about "The End of Racism? | AMERICAN HERITAGE"