Eight prominent American racial justice organizations have formed a new coalition with progressive Jewish groups called “United Against Hate” to fight anti-Semitism as the presidential election nears, according to a statement published Friday.

“Far-right extremists in government, media, law enforcement, business, and militia groups have spent the past four years escalating the violence and harm they enact on our communities,” the statement says. “They have murdered Jews, Muslims, Black folks, Latinx people.”

“We will continue to fight back, side-by-side, to reject the antisemitism Trump and his allies foment,” the statement continues, “just as we reject the Islamophobia, anti-Blackness, anti-Arab and anti-Asian hate they promote, and the racist and anti-immigrant ideologies their policies are built to advance.”

The statement was written and signed by the national umbrella organization Movement for Black Lives, the Florida-based Dream Defenders, the Latinx group Mijente, the immigrant rights group United We Dream, the Arab American Institute, Muslim-led groups MPower Change and Emgage, and the People’s Collective for Justice and Liberation, a group that works to counter anti-Asian racism.

The United Against Hate coalition has formed during an alarming rise in anti-Semitism. Just this week, President Donald Trump tacitly endorsed the QAnon conspiracy theory, which is rife with anti-Jewish sentiment, and earlier this month, he pushed the anti-Semitic conspiracy theory that Black Lives Matter uprisings were being funded by Jewish billionaire George Soros.

“The fight against anti-Semitism has been kind of claimed and owned by the right for a while and by mainstream Jewish organizations, and major Jewish establishments, and they have failed to meet the moment,” Morriah Kaplan, director of political education at IfNotNow, told HuffPost. “So this initiative is in response to that and really a recognition of the need for this fight against anti-Semitism to live within the progressive movement.” 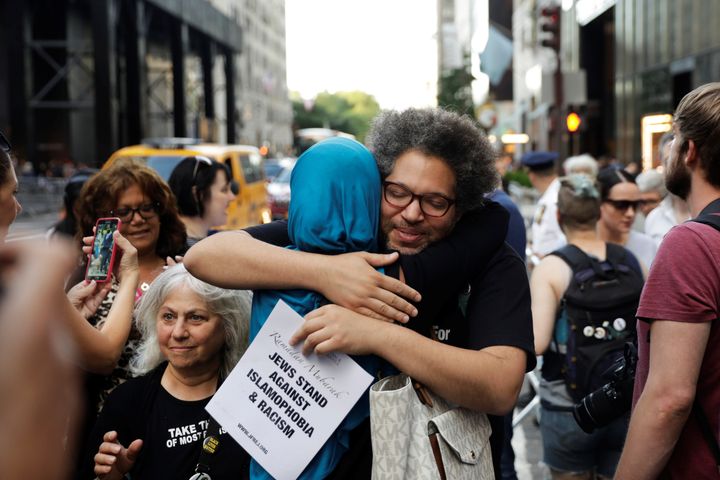 Lucas Jackson / reuters Activist Linda Sarsour hugs a friend as she prepares for the beginning of a demonstration and Iftar celebration during Ramadan outside of Trump Tower in New York on June 1, 2017.

Kaplan added that the American right “has been so effective at kind of co-opting and marshaling or exploiting anti-Semitism and fears of anti-Semitism and using it to target progressives, mostly women of color.”

She pointed to right-wing “smears” in 2017 claiming that Women’s March leaders were anti-Semitic, as well as allegations in 2016 that the stated values of the Movement 4 Black Lives — which included language criticizing Israel — were anti-Semitic.

The “United Against Hate” coalition, Kaplan said, will make sure the right “won’t succeed in sowing mistrust among our movements and among our communities in an effort to divide us.”

An example of this kind of division was on display this week at the Democratic National Convention. After Republicans spoke out against Palestinian American activist Linda Sarsour appearing at one of the convention’s forums, Democratic presidential nominee Joe Biden’s campaign disavowed her.

“Joe Biden has been a strong supporter of Israel and a vehement opponent of anti-Semitism his entire life, and he obviously condemns her views and opposes BDS, as does the Democratic platform,” Andrew Bates, a Biden campaign spokesman, told CNN, referring to Sarsour’s support of the Boycott, Divestment and Sanctions movement aimed at Israel. “She has no role in the Biden campaign whatsoever.”

Sarsour, who was a surrogate for the Jewish candidate Sen. Bernie Sanders (I-Vt.) during the Democratic presidential primaries, is executive director at MPower Change, one of the groups in the “Unite Against Hate” coalition against anti-Semitism.

Rachel Gilmer, a co-director at Dream Defenders, said conservatives are “trying to get us to see each other as the enemy, as opposed to pointing the finger at the people in power who are trying to maintain and monopolize power against working people, against poor people, against everyday people in this country.”

“It’s a classic divide and conquer tactic,” she said, and one she believes will be deployed frequently in the run-up to the presidential election this November.

What’s important now, Gilmer argued, is for the left to form a “strong united front against white supremacist, far-right violence.”

The Unite Against Hate coalition will hold a virtual panel discussion on anti-Semitism and racism this Tuesday.

Anti-Semitism Is Not The Issue; Palestine Is

Read more about "Anti-Semitism Is Not The Issue; Palestine Is"

TikTok has a Jew hatred problem. Do Jews on the app think it’s worth saving?

Read more about "TikTok has a Jew hatred problem. Do Jews on the app think it’s worth saving?"

Read more about "Purim and the Legacy of Jewish Violence (Jews, Christians, and Muslims from the Ancient to the Modern World (65)): Horowitz, Elliott: 9780691138244: Amazon.com: Books"